My parents live in the country. Like, serious country. Most of the time I love this because they’ve turned their home into an idyllic escape. But things also get a little Wild West out there from time to time. (I once drove up their driveway to see my mom banging pans in the front yard to scare buzzards off the roof so that my dad could shoot them. Only decades of marriage can lead to that kind of romantic teamwork, people.)

Anyway, last weekend I was home because my brother and his family were visiting. I woke up around 6:15 on Saturday morning because Rosie, my dachshund, wanted to go out. Because there are often coyotes around their property and Rosie looks like a chubby little bratwurst strolling around the yard, I went outside with her. I ran into my mom on their side porch and mentioned that Rosie and I were headed back to bed. 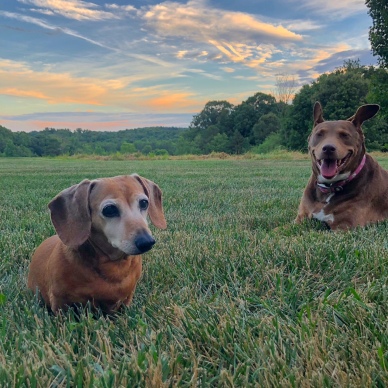 Five minutes later, as I tried to drift back off, I heard my mom running through the house “Sarah! Sarah! Get up! You have to come get Pawley! There’s a coyote!”

This is my worst nightmare. But it had always felt like it was only a matter of time at their house. And so at a speed I didn’t actually know I was capable of, I was out of bed and sprinting into the field in my pajamas in bare feet. I was screaming at Pawley to come to me, at the coyote to get out, and at my mom to “GET DADDY AND THE GUN.” It turns out that when there is a coyote threat, I get very country very quickly.

The coyote couldn’t have cared less about me. I assume that as a resident of that part of the county, he’s seen his fair share of crazy, half-clothed women yelling at the menfolk to get their guns. Pawley ran back to me, but my parents’ dog was still down in the field barking at the coyote. So, I decided my next move was to go after the coyote in my dad’s truck.

I threw Pawley in the house and sprinted for the truck keys. I passed my dad who was walking by at a remarkably casual pace in his bathrobe and carrying a shotgun. We didn’t even speak. I sped across the yard and into the field with the truck, which finally scared off the coyote and then my dad fired after it into the woods.

Personally, my favorite perspective on this story was from my brother, who woke up irritated because Rosie was barking from my bed where I’d left her as his toddler was trying to sleep. He’d come downstairs to find Rosie barking, Pawley—who is never allowed inside—running around freely, the truck gone, and no one else in the house. Then he heard a gun shot and saw me driving across the yard. It’s moments like this that probably make him happy he married a woman from Connecticut and moved to Massachusetts.

We spent the rest of the weekend using a coyote caller (yes, that exists) to try to draw the coyotes back out to shoot them. (Side note: I’m probably the most anti-gun person on the planet. But I’m like one coyote sighting away from purchasing an AR-15 for my next visit home.) Anyway, we didn’t kill any. But it made for an interesting weekend. And the best part? Pawley got a little more access into the house. As she curled up on the living room rug on Saturday night, I sensed she’d be totally fine with coyotes swinging by any time they wanted.

One thought on “Weekend in the Country”

Meet Poppy the dachshund. She’s the newest (and bounciest) member of the family.
Another summer week on the books at my favorite place with my favorite crabbing crew 💙
Thank you to Pfizer for making a vaccine so I could get on an airplane again. Thank you to @kvenning for letting us join for a few amazing days on your Montana adventure. And, most of all, thank you to this bison (and all other Yellowstone animals) for tolerating this excited tourist.
Winston turns two today! In honor of the occasion here’s a photo from yesterday, one documenting our first handshake, and the first pic I ever saw of the little butter ball.
It’s basically been a lifetime since I was in a hotel, so I may have been overly excited about the entire experience, but seriously how charming is this new spot in Highlands, NC?
Randomly, Winston and I happened to wear the same thing today. So we took a selfie. #thanksgiving
Sunday Snack Time: A Series
My actual house has a LONG way to go (see pic 2), but I have officially set up the most important part of my future home: The S’mores Maker (also sometimes called a fire pit).
Perfect day for a 🚲 ride and 🍁 peeping 🧡🤎💛
Loading Comments...
%d bloggers like this:
%d bloggers like this: