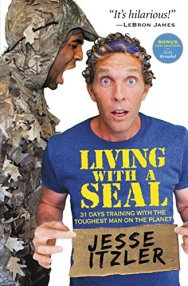 A few weeks ago I was having dinner with some friends at my house when my friend Kristy mentioned she was reading a fun book called Living With a SEAL. She said it was by the husband of the woman who created Spanx, Sara Blakely. I said that Sara Blakely had actually thrown the coolest party I’d ever gone to in my former life of doing things like covering cool parties. It was in Atlanta and co-hosted by Sir Richard Branson. Jane Fonda sat at the same table as the guys from OutKast. Jewel sang during dinner and then Collective Soul played at the after-party. I still have no idea how I got to go to that party.

Later that night, Kristy texted me an image of highlighted text from the book. It turns out that its author, Blakely’s husband, was at the same party, and he wrote about it as the night he really fell for her.

This completely meaningless connection intrigued me enough to download the book, which I enjoyed so much that I began reading and literally didn’t put down until I’d finished it a few hours later. It’s a memoir by Jesse Itzler detailing the month that he invited a former Navy SEAL into his home for extreme fitness training. It’s hilarious and inspiring. He weaves some stories of entrepreneurship and his unusual family life into the story, but for the most part it’s a lot about freezing cold runs and insane workouts, which are way more interesting than you’d think.

It’s inspired me to keep reading more crazy fitness books. I’m currently reading Born to Run: A Hidden Tribe, Superathletes, and the Greatest Race the World Has Never Seen, which is making me want to become a barefoot trail runner. Or, you know, get off my couch every once in awhile. I’m about to finish that one though and now I’m hooked on this theme. Any suggestions in the genre for my next read?

Before one brick was laid in its foundation, I knew this house was a gift. It’s not mine. It’s something I’ve been given to share—and just happens to be the place I’m lucky enough to come home to every day.
Christmas decor with a traditional emphasis on pink and dachshunds.
Perfect fall weekend in Maine 🍁 🦞 🚲
All pink today to celebrate @beccasakada and her soon-to-arrive baby girl 💕💕💕
Winston 💙
CLT—> ZION
Just a montage of two best friends constantly chasing each other.
Kentucky Derby 2022 🐎
Weekend with my favorite one 💙
Loading Comments...
%d bloggers like this:
%d bloggers like this: