I spent the weekend exploring. I’ve been working on a book (my publisher would want me to insert here that it’s called “Secret Charlotte” and it’ll be out in Spring 2017), and it’s taken me to the most unexpected places.

The book features 95 different “secret” things about Charlotte from alleged ghosts to unusual foods. And while they’ve all been fun to research, I’ve definitely had my favorites. One of those is Lakewood Park. 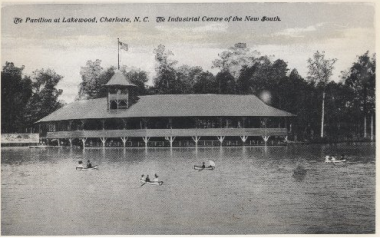 This was an amusement park similar to something like a Coney Island that was on Charlotte’s west side from 1910 to 1930. It had a lake with row boats, a pool, a zoo, a roller coaster, a carousel, and, most famously, a pavilion known for its dances. During WWI there was a large Army camp in Charlotte and Lakewood was a favorite spot for soldiers.Then, the Depression hit and the park’s popularity quickly faded. Shortly after that, a storm caused the lake’s dam to break and lake disappeared. 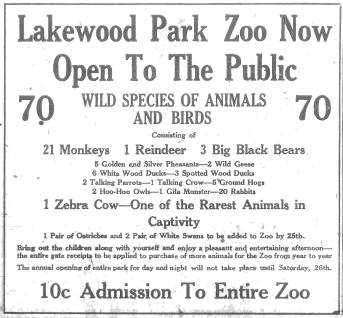 Yesterday, I drove to the area where there hasn’t been a park in almost a century. The streets are still named things like Parkview and Lakewood, but where there was once a lake is now a power station. And where there was once a bandstand and a carousel and a bathhouse, now there are warehouses. But the old trolley tracks that brought families from uptown Charlotte to the park are still there. They’re long since grown over and seem to lead to nowhere, but they’re there.

I’m dying to explore to see if there are any remnants of the past, but this didn’t feel like a particularly safe choice. (There used to be a tunnel from the lake to the amusement park that went beneath the tracks. Surely, there’s still some sign of it?) So, I went home and played on Google Earth. No luck. So, I came in to work this morning and begged my team to accompany me (as bodyguards) to the tracks. They’ve agreed.
So, stay tuned. (For either news that I’ve been murdered or photos of our finds.)

One thought on “Amusement Park Ruins”

Thank you to Pfizer for making a vaccine so I could get on an airplane again. Thank you to @kvenning for letting us join for a few amazing days on your Montana adventure. And, most of all, thank you to this bison (and all other Yellowstone animals) for tolerating this excited tourist.
Winston turns two today! In honor of the occasion here’s a photo from yesterday, one documenting our first handshake, and the first pic I ever saw of the little butter ball.
It’s basically been a lifetime since I was in a hotel, so I may have been overly excited about the entire experience, but seriously how charming is this new spot in Highlands, NC?
Randomly, Winston and I happened to wear the same thing today. So we took a selfie. #thanksgiving
Sunday Snack Time: A Series
My actual house has a LONG way to go (see pic 2), but I have officially set up the most important part of my future home: The S’mores Maker (also sometimes called a fire pit).
Perfect day for a 🚲 ride and 🍁 peeping 🧡🤎💛
I keep thinking of that F. Scott Fitzgerald quote—“Life starts all over again when it gets crisp in the fall.”
My house is on the market! As this is probably the cleanest (read: significantly less dog fur) it’s ever been, I thought I’d share a few pics. (Also, if you’re looking for a 3 bed, 2 bath in Plaza Midwood, may I suggest taking a peek? There’s an open house today from 2 to 4 😊)
Loading Comments...
%d bloggers like this:
%d bloggers like this: