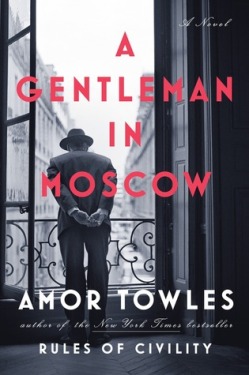 I’ve had a longstanding obsession with Russia in the first half of the 20th century. It started when I read the book Nina’s Journey the year it came out. That was 1989. I was seven. I can’t imagine why my parents thought it was a good idea for a 7-year-old to read an autobiography from Stalin’s Russia, but that’s an entry for another day. Anyway, my mini-review of my latest read:

The Book: It’s a beautifully told story about a cultured aristocrat who is put under house arrest in Moscow’s most luxurious hotel after the bolsheviks take power. And he remains there for decades—living an incredible life inside its walls.

Favorite Aspect: The food and wine descriptions. This may be the first time I’ve put down a book thinking, “Well, that really left me craving some caviar.” The author makes food and drinks sound as beautiful as any scenery and as charming as any person.

Top quote: “For what matters in life is not whether we receive a round of applause; what matters is whether we have the courage to venture forth despite the uncertainty of acclaim.” So, so true, right?

Meet Poppy the dachshund. She’s the newest (and bounciest) member of the family.
Another summer week on the books at my favorite place with my favorite crabbing crew 💙
Thank you to Pfizer for making a vaccine so I could get on an airplane again. Thank you to @kvenning for letting us join for a few amazing days on your Montana adventure. And, most of all, thank you to this bison (and all other Yellowstone animals) for tolerating this excited tourist.
Winston turns two today! In honor of the occasion here’s a photo from yesterday, one documenting our first handshake, and the first pic I ever saw of the little butter ball.
It’s basically been a lifetime since I was in a hotel, so I may have been overly excited about the entire experience, but seriously how charming is this new spot in Highlands, NC?
Randomly, Winston and I happened to wear the same thing today. So we took a selfie. #thanksgiving
Sunday Snack Time: A Series
My actual house has a LONG way to go (see pic 2), but I have officially set up the most important part of my future home: The S’mores Maker (also sometimes called a fire pit).
Perfect day for a 🚲 ride and 🍁 peeping 🧡🤎💛
Loading Comments...